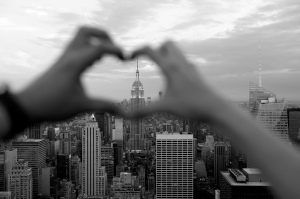 I really hate being compared to Carrie Bradshaw, but I’m starting to come to terms with it. We might live in apartments the size of her closet and I might be looking in the windows of Jimmy Choo instead of shopping there – but she got one thing right: there is love in New York.

And for a while, we all believed it – at least the six years that Sex & the City was on – but somewhere between The Bachelor and everyone joining Tinder, we got lost.

I know I definitely did. I moved here with a few bags, full of my clothes, my hopes, my minimal savings and my one pair of fuck-me heels (from Target, thank you very much). I didn’t have an apartment or a job when I landed at JFK – but I knew everything would fall into place because I had faith. And a hell of lot of blind ambition.

Five years later, things have worked out magically, happily, better than I could have ever imagined. I now live in the East Village, I work for a company I believe in, I’m a writer for a dozen or so publications and my dating blog could be turned into a book (I know, the Carrie comparisons continue, I’ve heard them all). Luckily for me, I have more than three best friends and my gay hubby is rather handsome and way more self-confident.

But that wide-eyed 21-year-old who looked up at the Empire State Building full of complete certainty that the man she’d marry was also looking up at wondering where she was… well, at 26, I’m still wondering where the f*** he is.

New York City gets a bad rap about being a difficult place to date in – and for my first few years, I wholeheartedly disagreed. There were so many opportunities to meet men – the bars, the concerts, the streets, the subways, the parks, the gyms – anywhere I looked, I was convinced that I’d bump into the love of my life.

And I did meet a love – my only New York boyfriend by falling down in front of him on a bus back from JFK. But when that relationship fizzled a year later, I was not only down on love, I was down on this city that promised me so much with it’s glittering streets and endless red wine and candlelight… and yet, left me, well, alone.

Three years later, I’ve probably gone on every possible type of date: the marketing executive who cried over his ex-girlfriend over noodles in Little Italy, the banker who calmly asked me if I’d like to be part of his rotation schedule of girlfriends, the divorcee who thought we’d bang on the first date because ‘that’s what girls do in this city’, the unemployed dude who showed up drunk and I had to put him in a cab, the one who lied about his age, the one who upped his height by 4 very important inches… and more that I’ve probably blocked out.

But even though the competition is fierce, the men have an almost incurable fear of commitment, the single population spends more time swiping right and left than actually speaking and the statistics are generally against my favor, I still believe in love in New York.

In fact, I still believe in love – anywhere. While the city is a great backdrop to all of those romantic comedies we love to hate, and it’s something we constantly complain about, dating is hard everywhere. Especially if you never get out of the oh-my-god-this-blows mindset when you’re meeting another stranger for another round of drinks.

Trust me, I get it – It’s tough when you’re running to catch the N train as it disappears or when you’re glued to your personal and your work phone 24/7 and when your Starbucks barista is really the only one who knows what you want – to keep giving love a chance. Sure, there are so many more things you could and should (cough, laundry) be doing, instead of the one thing that is nearly guaranteed to disappoint you.

When you feel that way or you feel gun shy to accept a date with yet another stranger or go to yet another singles’ mixer or agree to let yet another friend set you up: I challenge you to do this:

If you want proof that there is love in New York – go sit in Washington Square Park and see the NYU couples (who definitely don’t know any better) holding hands and sipping beers out of brown bags they’re too young to buy. Or head up to Central Park in the summer on the Great Lawn and watch the families of the Upper West and East Siders picnicking, without worrying about the time. When you’re riding the subway next, take a look around your cart (instead of jamming out or reading) and I know you’ll see at least a handful of couples commuting together talking about what they’re picking up for dinner and how work was that day. Go to your local grocery store – or just hang around Stuyvesant Town – to see elderly couples who have been together long before you even knew New York existed, using canes and each other’s support to make it through the snow and the slush.

The city may be brutal – with it’s weather and it’s pickiness – but it is also very soft.

To make it (and to date someone) here, you really have to be a mix of both: tough to help you through all of the obstacles, but vulnerable enough to see the goodness when it shines through the skyline. It isn’t always easy to see – and even harder to believe in – but I refuse to give up on my city because I refuse to give up on myself. On this person that New York has made me into: strong and yet, kind. I refuse to accept that true love can’t happen in these streets that have inspired authors, musicians, actors and well, all of us crazy dreamers.

Because to live here – and pay those damn rent prices – you have to be a little insane. And maybe that’s good for us. No one ever said that sanity was required to fall in love. And if you look around, all of the craziness is what makes us love New York anyway.