My friends know me as the daughter of a fiery, intelligent, mystical, mother.

Though she’s paid the bills with accounting and massage therapy, she spends her free time focusing on those untold ways of the universe. She investigates how the different planets and their position in the skies above us affect our daily decisions, the path we take and the one we choose. She believes  things in nature can mean more than a passing glance and in the perfect, yet incredibly frustrating, timing of everything.

It’s because of the way I was raised to believe in myself and in everything around me that I notice what I consider messages from something higher all the time. When I’m worried or anxious about something – anything – I’ll often find a penny at my feet or on the seat in front of me, and I take it as a reminder to have more trust. On nights I can’t sleep, staring out into the city lights, I remind myself that often when my nerves are high, something really wonderful happens the next day – and I’m almost always right.

It shouldn’t come as any surprise to me that even when I’m not in the most sober of states, I’ll remember my mom’s precious words of advice to keep my eyes (and heart) open to the world and see what it says, but I woke up on January 1, caught off guard.

Much to Lucy’s demands at 11 a.m. to take her for a walk before she barked my head off, I stumbled out of bed, staying far away from the mirror. After the shortest walk ever to retrieve coffee, coconut water and a very-needed, very-greasy, cheese-and-ham croissant, my roommates and I lounged in the living room, all nursing our excruciating post-25-years-old heads that don’t recover how they used to.

Without much to say – or energy to say it – we all aimlessly searched online and scrolled through our phones, laughing at drunken photos and half-hazy memories of ringing in 2014. After a photo of hundreds of balloons lining the ceiling of a West Village bar (I was trying to be artsy, apparently), I saw this photo: 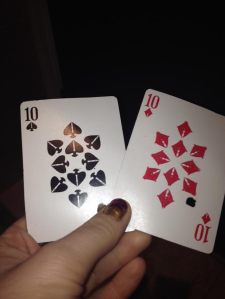 At some point in between toasting the New Year and falling asleep in my party dress, I must have found these two cards, recalled my mom’s instructions, snapped this shot and put them back where they were. Nope, didn’t even bring the cards home. Nope, my roommates had no idea either. Nope, don’t remember seeing them – or where I saw them. Nope, don’t know why I deemed them important, but that’s my painted New Year’s nails and hand, recording my first message from the universe for 2014.

So of course, my first call was to my mom:

“Oh no honey. Are you okay? What happened? Where are you?” She calmly freaked out.

“I’m fine, mom. I found two cards last night, I think. And I took a photo of them. And I think it must mean something, right?” I asked.

“That is really strange. Text me what they are and I’ll email you the meaning as soon as I can. Just have to dig out the Tarot cards. JIM!!! Have you seen my Tarot cards? Where did I put them? Getting old sucks, you are always forgetting things, Lindsay…” she trailed off.

Two hours later, when said Tarot cards were located, here’s what she said:

Ten of Spades (black card): Conflict. Destruction. Loss. Breakdown of relationships. Slander. Hurt. Misfortune. Plans that seemed promising end in failure. Disillusion. Grief. Temporary alliances. Being forsaken. A sacrifice. Withdrawing from the world due to trauma. The apex and end of a matter. Does not represent violent death.

Ten of Diamonds (red card): Freedom from financial concerns. Prosperity. Strong, established family setting. Protection and stability within a clan. Family traditions and gatherings. Having the time to enjoy the fruits of one’s labour. Achieving of worldly dreams. Benefiting from the work of one’s predecessors. Gifts. Inheritance, archives. Celebrations and reunions.

Last year was full of so much hardship, change, struggle and endings. And honestly, I let it get me down for a while: I stopped working out as much, put on some weight, became severely negative (and probably not a great date), felt uninspired by everything, wrote really sad posts and ultimately, thought nothing good was ever, ever going to happen again.

But as the close of the year crept closer, I decided I had two choices: I could either let the baggage and pain of 2013 follow me into 2014 or I could change my life instead of waiting for my life to change.

I picked the latter – and already, 2014 is bringing much more happiness than 2013 ever offered. Instead of counting the things I don’t have, I started valuing the things I do. Instead of thinking a man is going to waltz in and take away all of the hurt from my past relationships and make me believe there’s someone magical out there, I started focusing on myself and doing things that I like to do, the arrival of a man, be damned! Instead of taking seconds and always agreeing to chocolate, I started picking my health, not my cravings. Instead of seeing the bad, I started looking for the good.

Though I can’t say if the planets came together to bring those cards to me somewhere in this city as the clock struck midnight, I will say that it sure feels that way. Then again – signs can only mean something to us if we believe in them.

And this time, maybe I do. I do believe that 2014 will bring happiness and adventure and security and love and strength. Why?

Because this year, I’m not waiting around for it. I’m creating it.

This Valentine’s Day, write a self-love letter to yourself and it’ll be published (anonymous or not) on Confessions of a Love Addict! And you enter yourself to win a prize pack of beauty products and a Home Goods gift card! Learn more here. Submit here.

3 thoughts on “I Found Myself a Diamond”