I have a surprise for you, he whispered as he playfully kneaded my knee before returning both hands to the steering wheel.

What kind of surprise? I teased, careful not to distract him from staying on the road but finding it difficult to look anywhere other than his face. The moonlight — or maybe the city lights — were casting blue shadows across his cheek, making his eyes clearer and more prominent than ever. This was only the third or fourth time I had been in his car and other than riding in taxis on nights of drunken stupor, he was the only person I trusted enough to drive me in the congested streets of New York.

Just a surprise, don’t worry, he reassured and smiled. I could still see the dimples, even at this hour and in this light. I wondered how I made it here, traveling back from Queens after meeting a near-stranger’s family. Perhaps stranger isn’t the correct term, I would definitely call him a friend, but my heart knew that soon wouldn’t be the case. It was almost December, three months into our whatever-we-were-doing and I could feel myself trying to hold onto the platonic title desperately. I knew it was a worthless, wasted effort, but that’s never stopped me before.

There it is, he said with trickery in his voice. I looked at him, confused by what type of surprise could possibly be in this oddly-shaped box-like car. He nodded toward the right and I followed, only to gasp. There it was — my city. Every building twinkled as if it was winking at me: Look Lindsay, look where you live! He slowed down – as much as someone can on the expressway – and I tried to take it all in: the Chrysler, the Empire State, the jumbles of buildings that no one knows that names of, but everyone loves. Giddily, I looked over at him, only to find him smiling, thoroughly impressed that he was the first person to show me this view, to see my favorite place in the world, so close, yet far enough to seem as magical as it did when it was only a dream, not the address I put on the back of envelopes.

Stand up, he said while opening his sunroof. Stand up? That’s way too dangerous, these cars are going way too fast, I argued and turned my attention back to the skyline. Hurry Tigar, stand up! I’ll hold your legs and go slow. I promise I won’t let anything happen to you, he reassured and nudged my knee again. Still terrified that I may split in two, fall into the road, be pulled over by the NYPD or something worse I won’t let myself think about, I agreed by pursing my lips and shaking my head as I unbuckled my seat belt.

The November air wasn’t cold, but had just enough nip to wake me completely up as it smashed against my face. I felt his right arm wrap around my knees and I suddenly remembered he was also driving and said a little prayer that we both made it back to Manhattan alive. Then I remembered, Manhattan, and looked over at my home. Instantly, I outstretched my hand toward it, as if standing up and feeling the night itself could make it more reachable than inside a vehicle. I squinted to see as far as I could and though I’m sure I didn’t catch any glimpse at all, I imagined where in that big ol’ place was my little ‘ol place. The street we were heading, where the man securing my legs would wrap himself around my body in a tiny twin bed, and there, in that embrace that’s becoming far too familiar, I’d fall asleep easier than I ever have before. Easier than I have since.

Though I would never let anyone or anything change what New York means to me – it’s hold on my heart and the way it makes it race are incomparable to any other feeling – for a while, the skyline at night was something that made my stomach turn. That night, way before Mr. Possibility had become an actual possibility or my boyfriend, he showed me a view I’d always wanted to see, but never had. And maybe more so than the sight itself, he made me feel secure in a place that in many ways, was still so uncertain. In all the happy memories I have of our relationship, that simple night before lust became love, will always be one of my favorites.

And though I live in this boisterous city, part of the moving dots that make the skyline alive, I actually don’t see it all spread out before me very often. It’s rare to be so far removed from it that you get that view you send to others on postcards you buy in Times Square. So when I went out for sushi in Long Island City and we took photos in front of it, I felt that old pang and tried to erase thoughts of him. Or when a new pal dragged me out to Williamsburg, which brings out even deeper wounds and I saw the view of downtown, I choked down the tears by rambling about everything I knew about Brooklyn. And coming home from a trip to the mountains, where I laughed and played in the snow with one of my dearest friends in New York, I only glanced at the skyline for a moment, sure she’d see the disappointment in my eyes if she met them.

But Saturday night, something changed.

Though I tend to stay on my own island, I took three trains to help M move-in with A. Following many failed attempts to get IKEA to deliver furniture at the time they were paid to do so, we all finally gave in, drank Coronas and laid on the futon/makeshift bed and chatted. When the clock struck 12, I headed to the station, feeling equally energized and relaxed by the company of my best friends. A few steps and one Metro-swipe later, I found myself on the platform, hoping I didn’t get mugged in Queens, and cursing myself for having such an awful stereotype of a borough many fine folks live, including my favorite girls.

After finding the warmest place to protect me from the chilly winds on the above-ground platform, I turned to my right and there it was. My skyline at night. Cautiously, I walked to the other end of the platform, fighting the cold because I wanted to get as close to the view as I could. I noticed the color of the Empire State and wondered who had picked it. I saw the train tracks leading into town. I felt that same splendor I’ve always had when I see something – or someone – I love and there, in Sunnyside, Queens, a piece of my heart healed.

And for the first time since we broke up, this spectacular architectural composition meant nothing more and nothing less than something I love. It belonged to me again – not tarnished with sour thoughts or jagged pieces left to be put together. It wasn’t haunted by the lover I once I had or by the memories I shared with him, but it became free of anything other than that shine it’s always had, even if I tried to escape it.

And though I was freezing and desperately wanted the warm shelter of the train, I stood out on the platform peering at the skyline until it arrived. Just to feel my heart…feel. Just to savor the night and the city that’s always been mine – and only mine – to begin with. Just to realize that my heart is like the skyline – something I let shine for others to see, but at the end of the night, when the sun starts to rise and the wounds begin to heal, it opens up, bright and brilliant again, ready for another night, ready for all that’s yet to come. 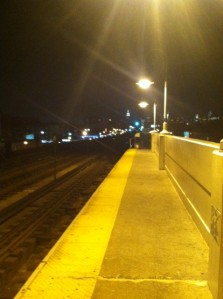