In matching gloves and coats, they kept their padded hands interlocked, laughing at their lack of flexibility and dexterity as they twirled and whirled around the rink. The snow had stopped, but the air was cool enough to transform their breath into puffy white gusts, enhancing their lust with every movement they made. I watched them dance across the ice, imagining what they must feel like, where they’re from, if they were in love or just starting — or rather, trying not — to fall. They were just tiny figurines in a world that was right at my fingertips — or 30 floors down — and yet, whoever they were, felt miles and miles away.

It was my first Christmas in the city — and it was everything I dreamed it’d be. Brightly-colored windows and sparkling streets, festive cocktails and events that called for girls in blue dresses with white satin sashes, and snowflakes that definitely stuck to my nose and eyelashes. New York was merrier than ever, but I, was not.

I had been writing this blog for just a few months and Mr. Unavailable had yet to turn into Mr. Possibility — though by then, we were having back-to-back sleepovers, both figuratively and literally. And so, when he asked if I wanted to hang out for an hour in his office while he finished up some work on a late Saturday evening, I obliged. While he was busy doing whatever it was he was doing, I found my way to a bay window in one of his partner’s offices and I curled myself up to the glass, overlooking Rockefeller.

And though my heart was full of hope for the things to come, as it always has and will be, seeing the city unfold in the cold made me incredibly sad.

I was working at a business magazine that never really fit me, I was in the tiniest of apartments in a not-so-great part of town, I was seeing someone that I was never convinced would turn into anything more, and though I knew I made the right choice in moving to the North, I was afraid that all I ever wanted — all that I came here to find — was unattainable. The job, the place, the life, the man — were those all things I put on a Christmas wish list that no one, not Santa Clause or Donald Trump (they’re one in the same, right?) — could shimmy down my chimney?

Don’t fall out, Tigar! And hold still. Mr. P said and interrupted my negative parade of thoughts. You look so pretty sitting there, what are you thinking? he asked. 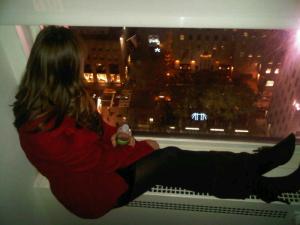 In as few words as I could muster, I explained my frustration and he carefully reassured me that I’d capture everything I came here to chase — but that it takes time. And that in a year, everything could be completely different and extraordinarily better.

I’d rather not admit that he was ever right about anything, but in this case he was — a year later in December 2011, I found myself a building over, in 30 Rock, celebrating with my colleagues the lighting of the infamous tree. This time though, Mr. P and I had been broken up for a few months, and I was still pinching myself that somehow, miraculously, I landed the job I really wanted. That Christmas, I didn’t have to sit in someone else’s window to see the view, I didn’t look longingly at the crowd and wonder when my happiness in New York would begin — instead, with champagne in hand and two friends by my side, we toasted to the year ahead… 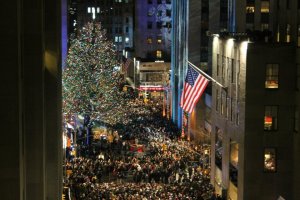 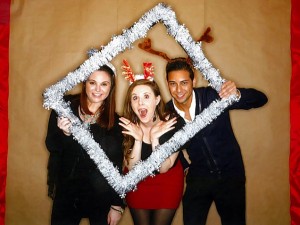 A year that is now almost over.

And one that’s been full of many surprises and travels, great and terribly bad dates, weddings and new friendships, fun projects and challenging experiences, difficult commitments and farewells that seemed premature, even if they were very necessary. But more than anything in 2012 — the one thing I’ve felt the most is a sense of completion. The feeling that I can give myself a moment to breathe, a second to enjoy the fact that I came and conquered, that I’ve managed to be secure and happy in a place that is mostly, neither of those things. And by the ways of the blog — or maybe just growing up — I’ve also found that peace within myself that I needed. The peace to be alone so that one day — I’m hoping! — I’ll find someone who is also at peace with himself, too.

Reading posts this time in 2010 or 2011 is like reading words from someone else — a girl that exists somewhere down inside of me, but has changed so much in such little time. I’m not overlooking Rockefeller this year since the holiday party isn’t at 30 Rock but I will go visit. To watch those playful skaters and see their cheeks rosy and their hearts overflowing. To see the lights reflect against each other, and to light a candle for everyone I love at St Patrick’s, just a block away.

But there’s no need to be above it because I’m not admiring from afar, it’s not out of my reach, it’s not some far-fetched, romantic idea that exists only in those dreams I let myself think about alone in bed. I’m not the woman who needs to long, instead I can stand in the crowd, shivering in the 30-and-below weather along with everyone else, enjoying the evening. Enjoying the splendor that is Rockefeller in December. Because, there’s no envy in my eyes or in the darkest spots of my soul — even if I haven’t found quite everything I came to New York to find, I’ve managed to seek out most of it.

And if time is the measure of change, the maverick that makes everything move and twirl, dance and whirl — then maybe next year I won’t stand along the flags in the crowd. Maybe next year, I’ll be one of those skaters, hand-in-hand with the right man. Or at least, a man I love.