On my 24th birthday last week, I was feeling antsy.

In fact– all the weeks leading up to my birthday I had felt anxious and unsure, wondering what my last year of the early twenties would bring me and what I should do next. I found myself lusting after expensive things and fancy travels, men in pressed suits and visions of apartments that are rent controlled with views of the park. I was wishing and hoping for a huge change that would rock my world in the most exquisite of ways, that would shift my negatives to positives and my fears into flights.

But maybe those things were less realistic and more idealistic, I thought as I walked from the subway to Union Square to meet my friend M. I’ve been lucky to experience so much so quickly. I’m happy in a job that brings me happiness each day,  and while the floors are old and the walls dusty, my name is on the lease of an apartment that feels like home. My friends are as thoughtful as they are entertaining, bringing me the best support and experiences I could ask for. And yet, though the weather was the perfect blend of summer days and fall mornings, I felt like something was missing. Like something had to transform for me, just as the seasons were doing. Like I needed to take a plunge and try something I hadn’t before. Something I’d always been scared of doing.

Many friends said I needed a man  — and while I won’t disagree that I’d love a love affair of sorts, it wasn’t romance I ached for as much as I longed to… nest. To really let my roots run as deep as the subway passages and make my stay in NYC more permanent than the zip code I write on the back of cards.

I considered redecorating but that felt silly when I know I won’t be at this apartment forever — and paint and drapery is both as expensive as it is unnecessary. I dreamed about recreating my wardrobe and putting the old out to find another life to indulge in the new I simply don’t need. I thought about starting another blog until I felt guilty about not updating this one as much as I would like. (Sorry, y’all.)

It’s true, even walking from store to store and giggling with M about the things that only best friends can find funny, I couldn’t shake the feeling that I needed to do something. To own something, to try something, to go or to stay or to run or to sit still. Or to what? I couldn’t put my finger on what it was that was making me so uneasy, when really, everything in my life (give or take) was rather, well, easy.

And then I saw Lucy. 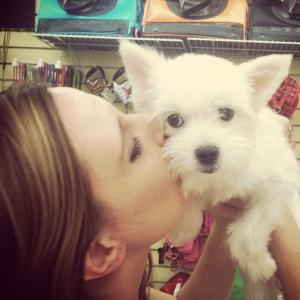 Or, rather a seven pound, six-month-old Maltese and Pomeranian mix at a pet store in the West Village. Not just any pet store though — it’s the one I always go to when I’ve had a stressful day or something is causing my heart to ache apart. It’s the one that’s near my friend K’s apartment and the one I’ve stumbled into far too many times after a boozy brunch to ooh-and-aww at the puppies that I wished weren’t trapped in tiny cages. But this time was different. This time — Lucy was there. Though I’ve never had this feeling about a man, when I saw her… I just knew. I knew when she climbed into my lap effortlessly and snuggled herself asleep that I’d be taking her home. 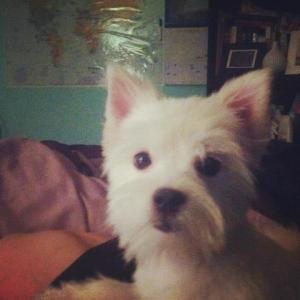 I always knew that having a dog would be part of my life in New York. I had considered it further down the road — when I was in a shining, healthy, functional relationship. Or when I was newly married in a newly-remodeled apartment with my new husband who I adored. Maybe the puppy would be the precursor to babies — you know, practice? But as this city has taught me time-and-time again, nothing quite goes as planned. And the best thing you can do is just to roll with what feels right. Admittedly, I’m not the best puppy mom that ever was — I’m neurotic and incredibly worrisome, plus a little freaked out by mostly everything she does or doesn’t do. I don’t have the most patience but I’m learning. I’m getting to know this lovely little dog who in a week, has already brought so much joy — so much love — to my life.

She’s getting to know me too, and my schedule and this “gigantic” apartment that’s near the biggest, most exciting park in the whole wide world — or at least, almost as thrilling as the trash outside. I’m running more than ever, now that my alarm is set earlier, forcing me to get up to relieve a bladder that’s not mine. My room has never been as tidy or organized as it is now, for fear that something as small as a piece of a paper could be dangerous to something furry and adorable. I keep to a routine and I watch my money, knowing that anything could spring up and I need to be prepared to care for something that depends on me fully. Plus, you know, she’s enrolled in puppy obedience school already, hence why she’s passed out in my lap as I write this blog on Sunday evening.

Maybe what I needed — what I felt was missing — was unconditional love. Was something to come home to. Sure, that could be in the form of a boyfriend, and I know (somewhere deep in this only slightly-bitter heart) that I’ll find someone special enough to share this life with one day. But for now, Lucy is the perfect companion. And like her middle name after the lady of New York herself, Lucy Liberty is teaching me to liberate myself from all of those silly two-year, five-year or ten-year plans I had for myself. To liberate myself from worrying about what’s next or if I’m doing everything right. Because really, there’s no way to ever know. And nothing ever turns out just as you thought it would.

Instead though, something sweeter does. 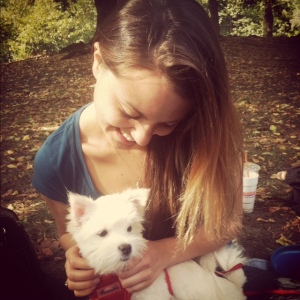 21 thoughts on “Liberated By Lucy”