Finally, the time has arrived for my new apartment move-in.

While I’ve enjoyed my time with Mr. Possibility, there is something about having your own room to be…well, you. I rose early this morning, ate breakfast with Mr. Possibility and headed across the river and uptown to my Upper West Side dwelling. When I arrived at my new place, grabbed the keys that are now officially mine, and peered into the empty space that would soon be filled with my things, I felt the same sigh of happiness I’ve felt with every budding residential beginning. Somehow, it feels like a second chance or third or tenth, whatever it may be.

I waited for Ikea to deliver my things, chatting it up with my new roommate, and the sublet who will be leaving soon. He is tall and intelligent, a fellow blogger, and a dude who moved to New York partly for his girlfriend. He will start Teach for America next month and they will be moving in together, and it was nice to hang out with a heterosexual dude discussing our own relationships, lives, and backgrounds. It was even nicer of him to help me piece together my furniture – or at least my dresser – when two non-English speaking, quite rude delivery men came and went without any exchange of words, just nods. Maybe a grunt or two.

With time to kill and wanting to shape my bedroom into some sort of functioning space before I sleepover there for the first time in a handful of days, I decided putting together my dresser would be the smartest move. I have more clothes than I do books, so the desk and bookshelf could wait longer than my piles of t-shirts, bras, and sweaters. The bargain-priced $150 six-drawer dresser in black/brown came in two extremely heavy boxes that my new friend carried into the other vacant bedroom.

We opened the boxes, listening to Queen, and drinking beer, and when the first cardboard hit the wooden floor, my jaw went with it. There had to be at the very least, hundreds of pieces – if you count the screws, plastic-things (yes, that’s the proper name), nails, and rollies (again, proper name). I was instantly a tad overwhelmed but once the package is opened, you’re better to put it together or you run the risk of losing essential parts. As we discovered once the dresser was assembled, Ikea doesn’t provide extra-anything in case you lose or mess up. The Swedish, apparently, don’t make excuses.

But R reassured me we could do it and he was determined to put his “manly-skills” to use, while listening to Maroon 5, John Mayer, and a random assortment of music that we both happened to like. The further we got along, the more the dresser started to actually look like a dresser…

…and the more impressed with myself I became.

I have hung curtains by myself, along with photos and mirrors. I’ve built a tiny bedstand that came in a very light box from Target. I own a toolbox I was given for high school graduation and I’m pretty comfortable doing simple projects. But I have never attempted something as complex as a dresser. Yet to my great surprise and satisfaction, I had created (with help from R) a functioning, standing-tall and strong, ready for my belongings, dresser. 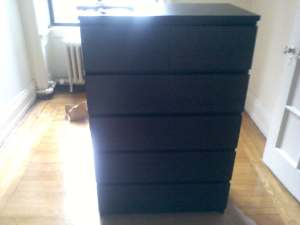 After situating it in my room strategically, thanking and friend-requesting R, and grabbing sushi because I was near-starvation, I caught the train back to Brooklyn to finish packing up my “vacation” suitcase at Mr. Possibility’s. Proud of my accomplishment and sending pictures of my “pet” dresser to my friends, to brag about my craftsmanship, I thought about how many times, even in a week, we experience the daunting feeling of an unassembled dresser. And yet, with determination, find a way to fit the pieces together.

Earlier this week, I received some disappointing news about a freelancing gig I badly wanted at a magazine. The byline would have been great for my career and ego, and no matter what anyone tells you, rejection always sucks. It may become easier to stomach the older we get, but if we’re human and heartfelt, our hopes will always rise. And with that email turning me away, I felt the same dread and daunting feeling come over me as I did when I first saw my unassembled dresser in its box. But I pushed through, I emailed the pitch to other publications and I didn’t give up or give in to that ice cream sundae I thought I deserved, and by Friday, I attracted another bite. Another opportunity. Or with Mr. Possibility who sometimes can be as moody as me, especially when he’s stressed. Though we’ve never had a true argument, there have been times when I’d prefer the company of someone else over him. But give it a day or two and I’ll find myself missing him.

Life is often in a million pieces and it’s up to us to find a way to make them all connect. Because daunting feelings only last so long, and it really is determination and visualizing the finished product or scenario that gets us through it all. If we can always have the will to make it to the end, that sense of pride never gets old. Even if it is just over a dresser you made with your own two hands.

2 thoughts on “A Daunting & Determined Dresser”