The cool spring air hit my back harshly, seeping right through my shiny, new (p)leather jacket. I was suddenly acutely aware of everything around me – the sound of the cars passing by on the highway, the heavy way my sunglasses pressed against my cheek, the redness of my dad’s face, the sadness in my mom’s eyes. I had already known when he told me — that’s why I had flown home with just a few weeks’ notice.  Those restless, sleepless nights where something gnawed at my stomach, urging me to see my father. When he said — with a shy grin on his face, taking a big sip of margarita — that he had colon cancer and then he had surgery to remove it — it wasn’t a surprise. It wasn’t even surprising that they waited to tell me in person because they didn’t want me to worry. Not with my big life in the big city. It still wasn’t surprising that had I not hopped a flight in late March, they would not have told me until months later when we found out if he was cancer free or needed treatment.

Even though I was not shocked, I cried at that Mexican restaurant anyway. Like I was six years old again, I crawled into my dad’s lap, careful not to rest on his scary incision and I cried. I didn’t care who was around or what our waiter must have thought about this family of three at his table. That night after everyone went to bed and yet again, I couldn’t sleep, I laid outside on our back porch, looking up at the clear blanket of stars, trying to make a bargain with God to keep him healthy. To make that cancer go away, to make all of these terrifying feelings go away. After I sobbed in only the way you can in the deep thick of the South, where no one but the tree frogs and the deer can hear you, I still wore my anger like a jacket, protecting me from the frost in the air that was making my breath white. And I asked the universe, why? Why my family? Why couldn’t something just give? 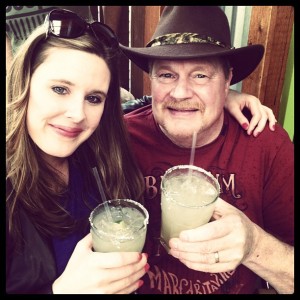 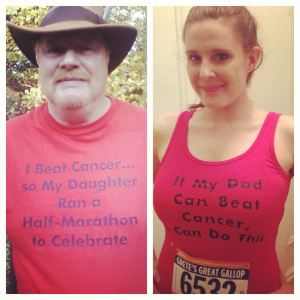 I spent entirely too much money on this dress that no one noticed.

Well, no man anyway. It was one of those sticky summer nights where the city smells rather terrible but glows under the colorful, never-ending sunset on the river. I sat with my friends at a boat-turned restaurant called The Frying Pan, drinking Coronas and eating French fries, pretending I didn’t have to be in a bikini the next day. I smiled and laughed through our conversation, some of it intense, the rest of it meaninglessness, trying my best not to compare myself to the women I’ve grown so close to in New York. Two and then three years passed so quickly that I felt like I missed some memo, didn’t catch any boat but this boozy one, and while they all ended up in new jobs or in apartments-for-one with their boyfriends (or rather, probably the men they would marry) I was still here. Still going to the same bars and logging into the same dating sites. Still answering calls and emails from people I knew better than to entertain. Still running, maybe just in Central Park, or away from something I didn’t even know I was afraid of. As I tuned out, staring at the minimal NJ skyline, reapplying my signature red lipstick while they talked about things I tried not to be jealous of, one lady exclaimed to no one and everyone: isn’t it gorgeous tonight? I grinned and nodded, widening my eyes for effect, but inside I was asking myself, why? Why can’t something give? When will it be my turn to be excited again?

I wanted a third drink after the second, but my mind reminded me it needed to win tonight.

He sat there so casually at the tapas restaurant a few blocks from my job. I don’t know why the 25-year-old me decided it would be a brilliant idea to see my ex-boyfriend after all of this time apart, after all of those oceans that separated us helped me move on this past year. I convinced myself I needed closure while my friends tried to persuade me I didn’t, but I let him buy me dinner anyway. I tried my best to stomach my way through our small talk, growing increasingly annoyed that I was sitting across from him, feeling oddly comfortable and terribly suffocated, too. He suggested another drink, I suggested a walk on the highline. And there, watching the taxis spin and the streets glow green and then yellow and then red, I tried to ignore the bittersweet analogy those traffic lights made with our relationship. I asked him the question I needed to know, that one thing that I knew would break my heart, regardless of the answer, just so I could push myself over the edge of lingering hope. Just so I could crumble that cliff at its peak. Once we said our goodbyes – for the 100th and final time – I fled to my best friend’s Upper East Side apartment. I didn’t know if it was her hug or her big glass of red wine that make me feel instantly better, but I savored them both. She listened while I explained, she questioned when I didn’t cry and she sweetly reminded me that now is when it would be tough. I stared at my phone on the bus ride back to my apartment, deleting every trace of him from it, feeling my chest tighten and harden just a little bit, watching the buildings appear and disappear as we sped by. Why? Why does it still hurt after so much time? Why can’t something give?

It was the first email I saw on a Friday morning.

I wasn’t fully awake yet, browsing through Instagram and Twitter, when I went to check my work email and then my personal. But it was there, in black-and-white and sent from his iPhone. Deported. He’s being deported. I said it out loud, as if it wasn’t real until I heard it. As if those paragraphs from his lawyer weren’t actually fact, but fiction, an email forwarded to me as a joke, as a silly play on words that we’d laugh about together over happy hour drinks. I called him, sitting straight up in bed, placing my hand on my heart to keep it from racing. No answer. I texted furiously and as he always does, he reassured me that this was just temporary, that London isn’t quite so far, that it’ll be a nice change, that he’ll be back again. I cried in the shower, thinking of my handsome best friend, my gay husband, the first man that ever stole my attention and my love in New York. That night as I walked from Chelsea Market to his apartment, stopping to buy flowers because I didn’t know what else to bring, I tried to imagine this place without him. Without our quick trips to each other’s places, without our annual Halloween party, without his constant reassurance that my breasts are in fact perfect, without our joint costumes and weekend jaunts. I thought it was ironic that the moon was full, promising a shift in the stars, when inside all I could beg for was for something to give. Why can’t something just give? 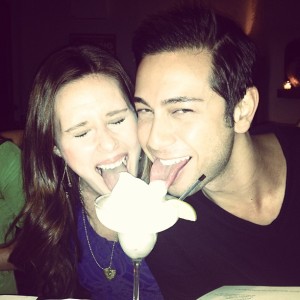 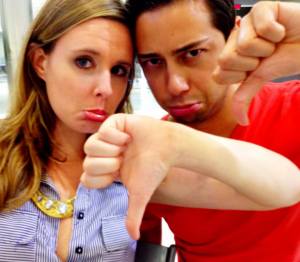 They called us in one-by-one.

It was like some strange twist on Noah’s Arc – there would just be a few of us who had our jobs by the end of the day. The company, my dream company, the place I looked forward to going to with people I admired greatly, was closing. Folding into another website. I was one of the ones left behind, as I watched the people I’ve worked with for two-and-a-half-years emerge from an office, holding their walking papers with brave smiles and positive attitudes, reminding me that in the midst of change, there can still be some hope. The survivor’s guilt was tremendous. My safe haven of a job, my fun day-to-day would be morphed into something entirely different, something I didn’t – and still don’t – know what will be. I sat at my desk, trying my best to relay my fear to my friends via Gchat, but the only words I could think to type were: why can’t something just give? 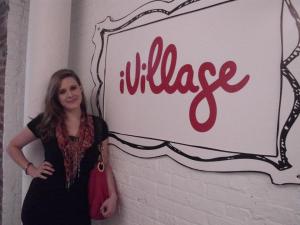 The sky was so blue yesterday as I walked through the Upper West Side.

I had barely any sleep after a night out with friends from far away. I had laundry and errands to do, a dog to walk and groceries to buy, but I just wanted to take it easy. I walked down Broadway and then down Amsterdam, criss-crossing and thinking about 2013. The hell of a year that I’ve almost survived. The year that I thought would bring me love and new beginnings, but instead, it was full of painful moments and undefined changes. It helped me earn those stripes, those Lindsay Tigar-specific stripes that made me stronger. That made those stripes even thicker. But it also taught me one powerful lesson:

When you keep asking for something to give, the thing that has to give is you.

And not give up – but give in to the universe and it’s unpredictable, unimaginable ways. You have no control over many things in your life, no matter how badly you wish otherwise. So give in. Let it go. It’s all going to happen regardless – so stop asking for something to give and start living instead. 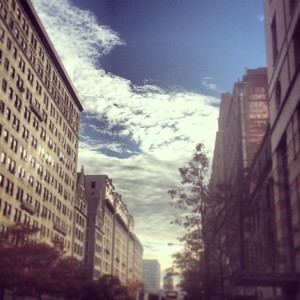 6 thoughts on “Why Can’t Something Just Give?”