It’s no secret that I’m a little skeptical about online dating. Though I’ve technically been a participant in the love interwebs for years (off and on), I’ve yet to find what I consider someone I’m into enough to date long term. I know that statistics show that lots of people meet their significant others online (1 in 5!) but I just haven’t found much success and often feel like throwing in the towel. But my friend from college, J, makes me want to give it another try. She’s recently engaged to a man she met online and their story will make you get on Match for an hour tonight. No joke. Oh – and just try not to cry during the proposal video. If you want to write your own Falling in Love on Fridays post, click here.

Tomorrow or Ten Years from Now

After getting dumped by my boyfriend of two years, I had given up on love.  I would go out, flirt with guys at the bar, and then go home disappointed, realizing that there were no good men out there. I felt like a sad imitation of the gals from Sex and the City: Hopelessly romantic and also a little hopeless… After one of my nights with my girl friend Lillian (and way more than my half of the bottle of wine), I decided it would be cathartic to create an online dating profile. That way, my not-completely-sober self rationalized, I could highlight my best qualities, something I don’t often do in my self-critiques and realize how awesome I am.

I created a profile on a religious dating site, mainly because the guys my friends found on regular dating sites turned out to be absolutely horrific. Immediately, I was receiving messages and emoticons from guys, some of whom were too old, a little creepy, and just so, so wrong for me. It made me laugh a little, though, and I felt better about myself, realizing that at least somewhere out there, guys thought I was worth pursuing. 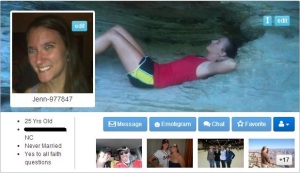 I took a break from the site and retreated to the beaches of North Carolina under the pretense of house sitting for a friend. She was visiting her boyfriend over the 4th of July holiday, so I had 4 days by myself, with only her dog and my dog to keep me company. I laid out, got some sun, read, wrote, and just allowed myself to accept where I was in life.  Like most of my trips to the beach, the salt water washed away my worries. Here I was, surrounded by thousands of tourists, with no one sitting next to me. No one talking to me. I was alone among the masses, and I felt more at peace than I had in a long time. I finally accepted that it was okay to be alone, and that refocusing on improving myself was now a priority.

I drove home refreshed, realizing that for the first time in a long time, I was freed from my insecurities, from my unhappiness. I was me once more, made whole by the sand, sun, and surf. It had been a month since I had joined the dating site, and I thought to myself, “Give it one more go.” After all, I was back to myself, the type of girl who could look on something like a dating website as an opportunity and not necessarily a last resort.

I had a few messages from a few different guys, but none of them really caught my eye. So I did what any girl would do: Scroll through the guys in my area until I found a cute one and then stalk him. I wasn’t planning on messaging anyone, since I still just had the “free profile” that wouldn’t let me send messages, but it was fun to “browse” the available men. One page down, then another.It was interesting seeing the men in my demographic and how varied they were. And then, I saw him. Tall. Good looking. Not too old. Not already divorced. Professionally successful. To say I fell in love with a picture and profile is a stretch, but it was close.

My newfound sense of purpose gave me the courage to bite the bullet and send my first message, something I equated to walking up to a guy at a bar. Really, was there any difference between me approaching a stranger at my local watering hole and sending a message through a social forum? No, I told myself, there wasn’t. Plus, if he immediately rejects you or doesn’t respond, you don’t have to slink away in front of his friends and a bunch of random strangers. I typed out my short message and hit “send” before I lost my resolve. Then it was time to sit back and wait…

A day later, as I was checking my email, a notification message from the site popped up. The mysterious “Brad” had responded to my message. Thrilled that my first foray into online dating had resulted in at least a consensual message, I clicked open my email and read his brief message which was punctuated with tons of questions. What did I do? How did I like NC? Where all have I traveled to? I eagerly replied, answering each question in depth, wanting to give him the fullest version of myself. I hit “send” again and felt a sense of hope. Hope in my newfound freedom. Hope in this conversation with a stranger. Hope in myself.

We officially had our first date at a minor league baseball game, way better than the coffee date that was originally planned. He changed it last minute due to my love for the sport. We laughed. We ate hot dogs. We danced and sang to “Take Me Out to the Ball Game.” We stood next to my car, and he pointed out the stars to me.  Then we went on a second date. Then we had lunch. And then… and then… The days turned into weeks. The weeks turned in to months. He met my friends. I met his. Then he met my family. And then I met his. We started speaking about the future, marriage, kids, family, all the things you plan for in your head when you’re with someone you love. And every time we talked about it, every time he got nervous thinking about the future, I’d tell him the same thing: “I’ll marry you tomorrow, and I’ll marry you 10 years from now.”

For the first time, I didn’t need a ring to define my relationship. I knew I had found the one, the guy who could make me laugh until I cried and who could cure my tears with laughter. So many people say, “I knew he was the one…” and I finally knew what they meant. It didn’t matter to me how long it would take. Our friends started asking about engagement, proposals, the possible future wedding. And as always, I’d tell him, “I’ll marry you tomorrow, and I’ll marry you 10 years from now.”

We celebrated Christmas. We celebrated New Years. We went dancing and cooked dinners for each other. Each and every day, I woke up feeling happy. He didn’t define me. He still doesn’t. I was finally in a place where I was comfortable with myself, and I found someone who loved me for me. All my faults and failures, he accepted. Through his loving me, showing me how someone else could view me, he allowed me to learn to love myself, and for this, I will be forever grateful to him. 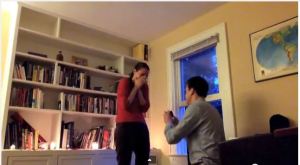 People get cynical when it comes to online dating. I knew I was. For months after we started dating, people would ask, “So, how did you two meet?” and Brad and I would both exchange a look. I was the only one able to tell the story with a straight face because to both of us, it was still so ridiculous. We’re old-fashioned, and we met through the internet? But somehow, in this crazy mess of life, we found each other. In the end, the means of how we met don’t matter. Boy meets girl. Girl falls for guy. It’s a story as old as time.

One thought on “Falling in Love On Fridays: Tomorrow or Ten Years from Now”