If you’ve ever visited Hayesville, North Carolina: you would be certain of two things: the southern mountains and lakes are among the most beautiful in the world, and small towns cultivate loneliness that’s much wider than the length of the county line.

My sophomore year of high school, when my family picked up and moved to our lake home in Hayesville – you could say I was a little less than stoked. I had grown up seeing the same faces, hearing the same voices, wondering the same familiar roads my entire life, and to be dragged further into the country than I already was, far away from everything I knew (and loved), was incredibly scary.

At first, I had confidence in making friends and finding my place because, as anyone can see, I’m not exactly shy. But after a few weeks of intensely trying and still having no one to eat lunch with…I lost some hope. I turned to the school newspaper and the local one (thank you for my start, CCP!) to vent my thoughts, but I longed for friendship and companionship more than any byline.

And as if the heavens parted, allowing some brilliant light to rescue me, Mr. Faithful walked into my life. Almost literally – I met him as he was walking from math past my biology class where I was waiting to enter. He flashed his pearly whites at me and with a short burst of gumption; I invited him to my family’s barbeque (slipped my phone number in his shirt pocket and all), and he accepted.

After a round of truth or dare required our lips to meet, we were inseparable.

Mr. Faithful became my boyfriend in less than week,  and for the next three years, right up into college, he was my everything. To this day, when I think about lying on a swaying dock underneath the stars with my head on his shoulder –I feel that beautiful love we shared. It was something so simple, so sincere, so sweet – and so perfectly ideal for that time in my life.

During this period, my dad’s illness was progressively getting worse and I can’t even count the hours on the phone I spent crying, worrying, and talking to Mr. Faithful about how much fear I had and pain I was in. He was there to support me, physically or emotionally, to hold my hair while I was sick (yes, he was that nice), and to reassure me in my darkest hours.

I cheered (from the stands) at his football games and helped with homework, he watched my tennis matches and read all of my articles. I baked him cookies and he wrote me love letters. He agreed to watch girly chick flicks and I agreed to go fishing. While I’ll admit I did most of the taking and he did the majority of the giving, the relationship we had was pretty easy and amazing.

Even after my family moved back to my hometown the following year, we stayed together. The long distance presented a long list of challenges and though we broke up a few times, we never strayed too far from one another. To this day, he is the only man who has ever given me a thoughtful Valentine’s Day, Christmas, and birthday. Mr. Faithful always knew what to say, when the say it, and how to make me feel absolutely beautiful. He is my very first love, the first man to see and explore every part of me, and someone I will never, ever forget or stop caring about.

It was my own insecurities and curiosity that robbed our relationship of its innocence. I was only 15 when we started dating and while he always had such security in us, I always had my reservations. There were things about him that I didn’t know I could live with my rest of my life – and I surely didn’t want him to be the only guy I passionately made out with. And that thinking led me straight out of the relationship with Mr. Faithful and into the arms of Mr. Rebound.

For better or for worse, our relationship ended…and not well. Once I realized my mistake in breaking up with him the start of my freshman year of college, it was too late. I pushed him to a point he couldn’t return from, betrayed his trust, and his image of me and everything we had, was ruined. After many awful fights and tear-fests, we stopped all communication. After about a year, we met up again, tried the whole dating thing and quickly realized it wasn’t going to work. But at that point, I think we had both finally had enough and were at peace with what we shared.

Regardless of our story, who did what or why it ended – Mr. Faithful taught me so much about life and even more about love. When we were together initially as each other’s high school sweethearts, his love for me was unconditional. He forgave me for any harsh word, poor action, or cruel mention. He was always there for me and I never doubted his sincerity or feelings for me. Of all the men I’ve ever dated, I’ve trusted him the most. Maybe that’s because I had never been sincerely in love or had my heart truly broken until him, so there was no scar to keep me from believing.

The hopeful romantic in me wants to think we will always be connected in some “First Love” magical way, and the realist in me thinks everyone has that initial taste and introduction to love, so really, it’s nothing special. Nevertheless, certain songs, particular places, the sight of elves at Christmas, long car rides, and Donald Duck will forever remind me of him – and those thoughts are not painful ones, but peaceful memories of the love I once felt.

Mr. Faithful is an important part of my journey and my life because he made me believe in the power of love. And not just romantically. He didn’t have an easy upbringing (although his mom was always supportive) or a ton of money – but he strived for something higher and he always sought to give me the best with what he had. He hardly complained and rather, only worked towards what he wanted with diligence. Currently, he’s finishing up his last year in college before going to graduate school and eventually medical school. Last I heard, his lovely girlfriend, A and him are planning on going to school together, and they seem very happy together. (She’s even complimented this blog, so thank you, A!)

I was always amazed at his ability to forgive and forget, to keep going when the going was absolutely terrible, and above all other things, remember to love me to the highest of his ability. Now, if I ever question something or if I wonder if true love is actually out there, and if I’m meant to have it, I think of Mr. Faithful’s dedication to me (hence the name) and to the whole idea behind love in the first place. He now serves as a reminder to me that out-of-this-world love not only exists, but endures, too. And of course, just as he was with me, it is also patient and kind, it does not envy, it does not boast…

…and above all, it believes.

Our relationship worked because we respected and encouraged each other. I was constantly telling him he could do anything he wanted and the world was an endless adventure for him to explore, and he reassured me that everything, with my dad, with my career, with New York, with college…would be okay and I shouldn’t worry. In addition to all of the memories of him, something he gave me still sits prominently on my dresser in my New York City apartment.

Towards the end of our relationship, we were walking through the mall in my hometown, and of course, I dragged him to Halmark because I was (and still am) addicted to it.

Secretly, he managed to buy a plaque for me as an early high school graduation gift and gave it to me outside the store: 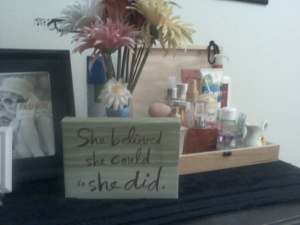 “She believed she could, so she did.”

That saying has stayed with me the last five years I’ve had it, and it’s always traveled with me. From every dorm room and college apartment, to summer vacations and New York city lofts…to where it sits now, right at my doorway, so I see it every time I leave and every time I come home. It doesn’t always remind me of Mr. Faithful, but it gives me a certain strength and surge into my already fiery ambition.

So, to you, Mr. Faithful – thank you. For always being available, for loving me, for sharing so much of yourself with me and allowing me to do the same, and for continuing to be a shining example of unconditional love. I wish you nothing but the very best of love, of life, of success, and of happiness. I can’t wait to see Dr. in front of your name one day!